Charitable projects of the fund

We are happy to inform you about successful project completion! We thank everybody who took part in it! 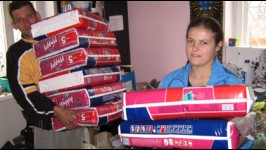 Pampers (nappies) and other sanitary care means are the urgent needs of special need children and adults. Our Fund is trying to provide them with nappies on the regular basis. So we are looking for financial support from your part to help us provide all those children and people with what they constantly need.

Some of the children from Cherven orphanage are brought here to Tarasiki when they come of age. We comae there to find those kids. This place was in a very poor condition. Now however help is underway.

A major project is underway in Yazovki Adult Institution as the building of a house for independent
living gets underway. The project is the idea of Edel Smith from Doonbeg and she has been very busy
over the past while fund-raising for the project.
Yuri Kruk, who is a building coordinator on the Belarusian side, has got everything organised over the winter – the foundations went down before
the winter arrived – and now he has the blocks and materials in place as we await the arrival of the
Gang from Offaly to come and do the blockwork.
On April 9th
now on site and tearing into the work.
the Offaly Five arrived ready and eager for work. Noel, Jimmy, James, David and Pat are now on site and tearing into the work.
Vova who lives in Yazovki is ready and willing to help the Offaly lads when they arrive!
Another group of men are planning to come on May 22nd
lads to get the walls up in the next week and have the structure in place by then.
We will keep you posted on the progress!
By Liam O'Meara
Read more

Representatives of Burren Chernobyl Project first went to this adult orphanage seeking out children who had been moved on from Gorodishche Children’s Orphanage. In particular we were trying to find Andrei a boy in whom Rose Mary had been particularly interested in helping. The building was off the beaten track as usual but in good condition. apart from the unit for invalids which was in need of a general overhaul.

BURREN CHERNOBYL PROJECT has started to work since 2000. DOBRA TUT fund has undertaken the responsibility to help in their needs.

Cherven orphanage for children and young people with special needs

Since 1997 Burren Chernobyl Project has undertaken the following in Cherven Orphanage:

Svir asylum asked us for help in 2009 to support them by renovating of the living areas. the main work was done March-may of that year.

During 5 years of cooperation with this asylum we have helped here with the following: did renovation work in several units, provided special equipment for laundry replaced the windows, etc.

Gorodische children's Orphanage for children with special needs, Baranovichi region. About 300 residents. BURREN CHERNOBYL PROJECT has started to work since 2004. Now DOBRA TUT fund has undertaken the responsibility to help go on with the work.

Our charity Fund was asked to help with renovation of the livig areas in Rakov adult asylum. With the financial support of Burren Chernobyl Project volunteers the renovation work is being carried out at the momentт:we help with plastering, tiling, painting, etc