On this night… 30 years ago 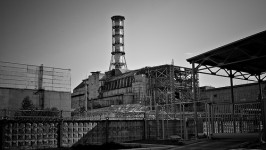 ‘Fragments from the nuclear explosion fallout at Chernobyl station which blew into the sky on 26th April 1986 landed on us. At first we heard only of rain clouds bringing devastation, of animals contaminated by radiation. We were told – ‘don’t go there, not if you are young, or pregnant, or ever want to be pregnant; not unless you want to come back with two heads, several cancers and the likelihood of more. Don’t go there!

In the quiet and dark of the night – of this night – thirty years ago as we all slept quietly, the world changed. For some it was just a news story the next morning on their news channel.

For others, it was in their lives, in their bodies, in the very air. And no one told anyone! Nobody really knew how much damage was being done. The beast released into the night air could not be recalled, could not be brought back. The genie was out of the bottle – with an evil that spread quietly and gently and deeply into the lives, into the minds and bodies of people – of children – we have come to know and love.

Thirty years on and we are still involved, still making that journey to Belarus. We go there not because of nuclear power or contamination. We go to meet those who are now our friends, our pals – and we go because we enjoy going there, we love going there.

Let us hope that tonight is a quiet night in the world;

that whatever evil that is about to be coughed up on top of our beautiful world will somehow be contained this night and not released.

Let us hope that something beautiful may be released into the night air this night,

Something to make the world a better place,

To make us all a little better.

Let us hope for something. Something small. Something beautiful. Something that will grow and creep like a rambling rose over the wall into our neighbours minds and hearts and souls around our beautiful world.

Let us hope this night for something beautiful.

Let each of us be that something small.

Something small and beautiful which will spread out from this night, in the quiet,

Without anyone being told.