Ilya can go to school with your support! 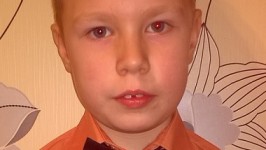 We can't leave this story, where you can become the heroes, unattended!

Please, help Ilya to go to school with his peers!

Here is his story:

Family Korenyuk from Lida is looking for your help in fundraising to pay for the rehab courses in "OLINEK" center, Warsaw for their 8-year-old child Ilya Korenyuk, as the family has not enough funds to pay for expensive rehabilitation courses, which cost 2000 euro. It’s only the father of the child that works and the mom is looking after the child.

Ilya is the second child in a family. Pregnancy was going ok. The child was born in time, with the weight of 3950g. At birth he was a perfectly healthy kid, developing well. It happened at the time of the first vaccination ...” Ilya was very yellow and I informed the doctor about it before the vaccination.”- The mom is telling Illya’s story.- “But she said that it was physiological jaundice, and that it would pass soon, and it was better to do vaccination while it was available. By the evening of the same day the temperature started to grow and the child was vomiting and eventually ended up in the intensive care unit. A CT brain scan showed a hematoma, which had to be removed. But in Lida there are no children’s neurosurgeons, and when the doctors began to call to Minsk, they were told to sort out the problem in the regional center, but in Grodno  (which is the region centre) there are also no children’s  neurosurgeons ... in Grodno emergency hospital the interns (Africans) agreed to operate, led by an neurosurgeon for adults. They conducted a brilliant operation and said that would be a pity if the child didn’t survive. By the way, the head told me "Do not worry if he doesn’t survive, because if he does, he will be just a vegetable."

When hematologists from Minsk arrived, Illya was diagnosed with the hemorrhagic disease of the newborn, and I was told that it was the reason why the child was yellow and if we hadn’t had the vaccination, nothing would have happened. In most cases it goes on unnoticed for 2-2,5 months for the children, if there is no vaccination done. But our case was unfortunately different. But God stood by us! The child survived. Long years of rehabilitation brought very good results. The doctors cannot believe it. We were constantly going for the rehab in Grodno, Minsk, Brest, in Lithuania. We work with a great osteopath.

Ilya went to the kindergarten in three years. With great difficulty we tried to get into a regular one, but if the child has a problem, he isn’t needed.

In September 2016 Ilya is going to go to school. He just needs a little bit of work to get to the level of his peers: to develop a full function of his left hand and to fully restore the speech.

A doctor from Minsk suggested going to the rehabilitation center in Warsaw. The method they use there is called the "Tomatis" and it is very effective. But the child must have 3 courses with an interval of 4-6 weeks. The cost of the course is about 2 000 euros.

We have never ever asked for, having coped on our own. But now for now it’s is a big amount that we can’t cover ourselves, thus we are looking for your help!

Please, help Ilya to have a pretty normal life around his peers!

We than you so much in advance!!!”