Announce of the Official Opening 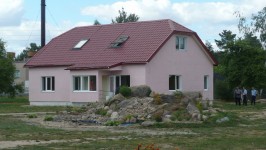 Dobra Tut Fund is happy to announce that the Official Opening of Edel Smith’s House for Supported Living will take place in Yazovki  Internat on Friday 18th September 2015. Many of the volunteer builders who helped construct the house are travelling to Belarus in the coming week to partake in the celebrations. Edel herself cannot travel due to the family circumstances but will be represented by her father John Smith and friend Pat Aherne. At the moment Yuri Kruk - the project manager is putting the final touches to this new development. The house which has been mainly sponsored by Edel and her group Help the Cherven Orphans is intended as a home for some of the children from Cherven Children’s Orphanage with whom Edel has built a strong bond over the years.

The Irish Ambassador to Vilnius will attend the official ceremony on Friday 18th as well as many important people and dignitaries from the Belarus side. Other Irish charity groups who helped fund and carry out this project will also be represented - Burren Chernobyl Project; Friends of the Children of Chernobyl, Killarney Chernobyl Group, as well as the builders from Athlone Chernobyl Group and the men from Roche Pharmaceutical Plant in Clarecastle, Co Clare who made several trips during the construction phase to continue the good work.

More details of the event will become available as the week progresses. And we will post scenes from the Official Opening on 18th.