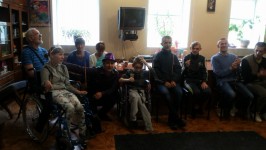 We welcome again the children from Gorodische children’s orphanage. This became an amazing tradition of Burren Chernobyl Project to take the children to Minsk and organize unforgettable holidays for them.

It seemed that everything had to go its usual way, as everything was set up, repeated many times, but no – there are always funny moments, too much emotions and tears of course.

In this group there were six children and a teacher, that were accompanied by Irish volunteers Maria and Julia, and Liam.

We wanted to have a really entertaining week, so that the children would remember it a long time, as their world is restricted by the walls of the orphanage and they hardly have a chance to leave it for such a long time and a long distance, some of the children never leave the place.

And I believe we managed. There were trips to the circus, Zoo, the amusement park, we invited a clown, bubble show, celebrated Lida’s birthday.

She has already been on holidays in Minsk before, but now she turned into a beautiful young girl of 16 and became more reasonable and independent. Sometimes she was giving Nikita a lesson of good behavior using so called “pedagogical advice”.

Nikita is a pure Angel (smiley and cheerful). He seemed as the quietness itself but overwhelming attention did its work – where else can you mess around?! It was “fun” for everyone – Liam, Maria, Julia, Irina and even myself.

The children were selected from different groups but all of them were friends – older boys were helping Lida and Nikita as they were in the wheelchairs.

It was probably the first time ever that Oksana has been out from the orphanage and so far away: you could tell how excited she was by the smile on her toothless mouth.

In a few words we were all singing and messing and having parties and rest – the week flew as though never happened. We didn’t notice the time at all!

And here came Saturday. Before children’s departure we went to see the aircrafts to the airport. Oksana was dragging her bag with belongings looking like about to cry – she thought it was time to leave. Yes the departure day is the saddest one, always comes with tears. For all the time of Minsk holidays I can only remember one group where no one cried – that were boys that work on the orphanage’s farm. They were tough, with no emotions and sentiments – real men!

In the orphanage I called to see the children in Unit 4 that were on holidays in Minsk earlier – they came all asking questions and having small requests. Don’t know why it is always so painful to see Tanya. I think her condition is getting worse and Tanya’s body becomes motionless, it’s only her beautiful face that live a separate life. She lies there on the floor in such an unbelievable twisted position: her head leaning towards the wall and her body looks like a separate part. I want to pick her up and sit her but realize that it’s extremely hard for her. What an unimaginable pain has been suffered and is still suffering this girl (and not only her). Tanya wanted badly to come to us, but unfortunately we couldn’t take her this time. I promise to take her next time if there are any more groups to come, and she replies: “It’s ok Tamara, don’t worry, I’ll wait”.

Beautiful, kind and pure children. When I have those moments of despair and it seems like life is unbearable and there is nothing ahead but darkness I recall your phone calls and voices of Tanya and Vaselina which wished me a good health, asked not to worry and to mind myself.  «We pray for you», - I heard them speaking to me on the phone! Heavily sick children think and worry about the others, while the majority of people don’t value what they have, don’t know how to live and to cherish every single day, they don’t know how to love and be thankful for every day. Thank you so much, dearest, kindest hearts. Perhaps with your prayers I’m still alive we are all alive...

Shortly before they left I got a list of the names of the children for the next holiday week (made by the children)! God bless them! 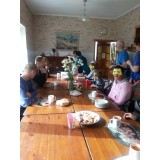 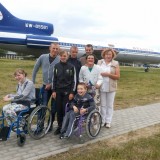 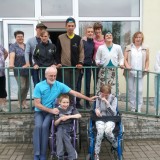